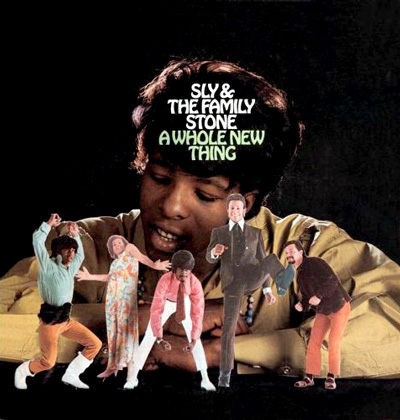 02. If This Room Could Talk info

08. Trip to Your Heart info

11. That Kind of Person info

2007 CD limited edition reissue (mono B-side version)
15. Only One Way Out Of This Mess info

A Whole New Thing is the debut album of Sly & the Family Stone, released in 1967 on Epic/CBS Records. Unlike later Sly and the Family Stone albums, A Whole New Thing was recorded live in the studio instead of being overdubbed. The lead vocals are shared between Sly Stone, Freddie Stone, and Larry Graham; Rose Stone would not join the band until they began work on Dance to the Music.

Issued in 1967, Sly & the Family Stone's debut album, A Whole New Thing, should have shocked the entire country. Its single, "Underdog," was the perfect blend of James Brown-style funk, hard Atlantic-style soul à la Otis Redding, gospel-styled backing vocals, psychedelic rock, and solid, hip vibes exploding out of San Francisco. That it took another album and "formula" for Sylvester Stewart -- former manager of many bands, including the Beau Brummels, and wildly successful disc jockey, songwriter, and arranger -- to pump it up and make it simpler is of no consequence because decades later A Whole New Thing remains just what it says it is; the simple truth is fortified, formulaic radio stations had no way of fitting it into a groove their stations could utilize, despite the fact that the LP was, in itself, pure groove sophistication. The 12 cuts that make up the original album were all written by Sly and the arrangements reflected what he wanted but had input from his brother and guitarist Freddie and horn players Jerry Martini and Cynthia Robinson. Greg Errico was the drummer and legend Larry Graham was the bassist. Rose Stone, Sly's sister, provided additional keyboards and vocals. Like most of the records coming out at that time, this one has some moments over its original 12 tracks that don't quite hold up, but even here, in these moments, such as on "Run, Run, Run," the sounds of a melodica and a vibraphone -- cheap ones -- interacting with the guitar both introduce and take the tune out. It's balanced by the very next cut, "Turn Me Loose," which comes stomping out of the gate with alternate lead vocals, changed line to line with the radical stomp of Otis Redding's live performances on a record and James Brown's horn section. But along with the grooves were Sly's lyrics. "Underdog" is one of the most defiant and uplifting tunes he ever wrote; with his singing of determination in the face of all odds, leaving behind the naysayers and doubters and the empathy of being an underdog, he lifts the listener to a new emotional and psychological place. The strange place of Freddie's guitar, playing jazz in a deep funk tune like "Bad Risk," walked the line of psychedelia and jazz, and still the rhythm section of Graham and Errico contain him inside the groove even when he solos with all of his reverb and distortion. [The beautifully remastered Legacy edition of A Whole New Thing includes five bonus tracks: mono versions of the singles "Underdog" and "Let Me Hear It from You" (to be fair, a terrible ballad); "Only One Way Out of This Mess," recorded for the band's third LP Life and left off; "What Would I Do," which was a track left off this album; and finally the unreleased stomping instrumental "You Better Help Yourself."] Thom Jurek. AllMusic
Sly Stone