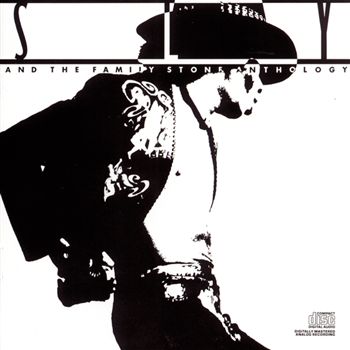 01. Dance To The Music info

08. I Want to Take You Higher info

11. Hot Fun in the Summertime info

13. Everybody is a Star info

17. Thank You for Talkin' to Me Africa info

Originally released as a 2-LP set.

Sylvester Stewart, AKA Sly Stone, was a singer, songwriter, producer and multi-instrumentalist who fused R&B with rock and roll when Prince was still in purple satin diapers. With the Family Stone, he created a complex, energetic brand of soul/rock that had a profound impact on both musical worlds. Stewart was one of the first pop artists to directly address racial issues (in songs like "Don't Call Me Nigger, Whitey"). Reaching out to people of all races, he also penned one of the funkiest, most memorable "message" songs, "Everyday People."

ANTHOLOGY is an excellent introduction to this crucial link in American music; it's also a collection of some of the finest singles ever recorded. "Thank You (Falettinme Be Mice Elf Agin)" is assured its place in funk history by virtue of Larry Graham's thumb-slapping bass riff. Butt-shaking anthems like "Dance To The Music" and "I Want To Take You Higher" display Stone's skills as an arranger, creating a whirlwind of sound incorporating funk rhythms, soul horns and rock guitar, along with the ensemble vocals that were a Family Stone specialty.

Les Claypool. Flea. Bootsy Collins. Eric Avery. Dave Allen. Pick your bassist - none would exist without Larry Graham. The slapping, thumb popping bass sound that is the diamond-hard cornerstone of funk and is de rigueur for practically every modern bass player was invented by Graham, and Sly Stone is the rhythm-meister who coaxed it out of him.

Sly and the Family Stone was the first sexually and racially integrated band of the 60's, and that openness extended into his music. Bubbling over with positivity ("Everyday People"), social critique ("Don't Call Me Nigger, Whitey") and a huge party vibe ("I Want To Take You Higher"), Sly set both the political and musical agenda for the decade. He walked the walk like no one else until James Brown picked up the baton in the 70's.

While all his early albums are riveting, this anthology is a perfect starting point for the uninitiated. If all you know is that goddamn Toyota commercial, you are in for a treat - you can hear the genre boundaries crashing down as Sly's band brilliantly fuses psychedelia, gut bucket funk, shining pop and soul. The early tracks are pure summertime groove ("Fun", "Dance to the Music"), while the later tracks show Sly getting darker, funkier and more political, but every song is branded with the mark of brilliance. This music is astounding in its lyrical breadth and rhythmic scope.

All seven minutes of "Thank You For Talkin' To Me Africa" ranks among the heaviest drop-dead funk ever waxed, the piercing horns and deadly guitar of "You Can Make It If You Try" will lift you to the heavens, and Sly's simmering organ runs make the heartbreaking tales in "Family Affair" absolutely captivating. Sly's heartfelt singing is meant to educate your mind, uplift your soul and shake your ass all at once, and what's nobler than that?

- Jared O'Connor
---
Anthology essentially replicates the previous collection Greatest Hits and adds singles from There's a Riot Goin' On and Fresh to the end of the album. Where Greatest Hits didn't follow chronological order, Anthology presents every single in the order it was released -- and, with the exception of the latter-day singles and the inclusion of "Don't Call Me Nigger, Whitey," that is the major difference between the two collections. Anthology goes for a sweeping, definitive overview, while Greatest Hits is a brief blast of 12 of the finest singles of the rock & roll era. Either compilation functions as an excellent introduction, but Anthology is more comprehensive, giving it the edge as a first purchase. Stephen Thomas Erlewine. AllMusic
Sly Stone