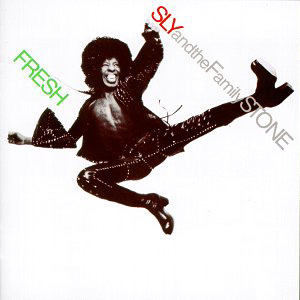 Vocals, guitar, bass, keyboards by Sly Stone Drums by Andy Newmark Trumpet by Cynthia Robinson Saxophones by Jerry Martini and Pat Rizzo.
03. Let Me Have It All info

Fresh is the sixth album by Sly & the Family Stone, released by Epic/CBS Records in 1973.

Berry Gordy, Curtis Mayfield, Philly masterminds Gamble & Huff, George Clinton, James Brown, and of course, Sly Stone. Admired as a genius among his contemporaries, Sly had really pushed the frontiers of American music across racial lines, capturing the hearts and ears of the Woodstock generation in the process. His legendary performance at the Woodstock festival kicked open the door for other African-American artists, and less than a decade later white kids would be dancing to "black music" in discos across the country. But in 1973, this was not a fait accompli. That's why we must realize that the funkiest track of all time, "If You Want Me To Stay," was really a musical deal clincher, rocketing high in both the R&B and the Pop charts for weeks on end, burning down barriers. Fresh was not as musically inventive as Sly's earlier records, Stand! and There's A Riot Going On. It was more an album of consolidation than of innovation, pulling together all the elements that made this group great-accessible lyrics, soulful singing, punchy horns, loudly grooving bass, kicking drums, and above all else, an energy level designed to take you higher. From first to last, the tracks flow with a kinetic energy that infects your feet, making it impossible to listen to motionlessly. Notoriously stoned and egotistical, Sly belts out "Let Me Have It All" like a great artist shamelessly demanding the world...and in 1973, it was his for the taking. Still, humility comes to the rescue in "Thankful N' Thoughtful," a gospel-funk tune that allows Sly the chance to bow his head before "the main Man" while in the midst of an ass-shaking groove. More contemplation comes in a funked-up remake of the classic "Que Sera, Sera," the album's second song to hit the charts. On "Skin I'm In," Sly tones down his self-admiration with a more thoughtful message of black-pride. He mixes social commentary in with the funk on "Babies Makin' Babies," a still relevant lament on teenage pregnancy. Fresh was well-recorded and masterfully mixed, with the bass pushed way up into a position of prominence, carrying the album along and making you move. The remastering leaves nothing to be desired, except maybe the inclusion of a few outtakes. This is a group that is way overdue for a box-set. Let's hope Epic gets on it soon!
---John Ballon. Musthear
---
Sly & The Family Stone: Sly Stone (vocals); Rose Stone (vocals, piano); Freddie Stone (guitar); Jerry Martini, Pat Rizzo (saxophone); Cynthia Robinson (trumpet); Rusty Allen (bass); Andy Newmark (drums).
Additional personnel: Little Sister (background vocals).
Engineers include: Bob Gratts, Willie Greer, George Engfer.
Sly and the Family Stone created the blueprint for funk's direction in the late '60s; a sound dense, sophisticated and complex on one hand, spacious and rhythmically elemental on the other, a style that seemed loose and open, yet demanded musical precision. In the early '70s, Sly left behind the churning, up-tempo anthems to brotherhood and positive thinking to develop a darker, more introspective sound that focused ever more intently on the subtle interaction of rhythmic elements. The result, as heard on 1971's THERE'S A RIOT GOIN' ON and 1973's FRESH, proved Sly's artistic apex.
Though lesser known than RIOT, and featuring cleaner, brighter production values, FRESH is no less astonishing than its predecessor. The first five tracks alone, including the shifting pulse of "In Time," the almost religious "Thankful N' Thoughtful," and the unendingly listenable "If You Want Me To Stay," are enough to make this disc a classic. Add to these the bubbling groove of "Babies Makin' Babies" and a definitive cover of "Que Sera, Sera," and FRESH becomes a document of meticulously constructed, high-minded soul music at its finest. Don't be misled by the corny, dated cover photo--this is one of the greatest funk albums ever. CD Universe
---
Rolling Stone (4/11/02, p.106) - Ranked #11 in Rolling Stone's "50 Coolest Records".
Rolling Stone (8/2/73, p.46) - "...FRESH is Sly's new direction for 1973, a potpourri of styles, new musical attitudes and futuristic black trances...the stonedest record I've ever heard, and one of the most repeatedly listenable..."
---
Fresh expands and brightens the slow grooves of There's a Riot Goin' On, turning them, for the most part, into friendly, welcoming rhythms. There are still traces of the narcotic haze of Riot, particularly on the brilliant, crawling inversion of "Que Sera Sera," yet this never feels like an invitation into a junkie's lair. Still, this isn't necessarily lighter than Riot — in fact, his social commentary is more explicit, and while the music doesn't telegraph his resignation the way Riot did, it comes from the same source. So, Fresh winds up more varied, musically and lyrically, which may not make it as unified, but it does result in more traditional funk that certainly is appealing in its own right. Besides, this isn't conventional funk — it's eccentric, where even concise catchy tunes like "If You Want Me to Stay" seem as elastic as the opener, "In Time." That's the album's ultimate charm — it finds Sly precisely on the point where he's balancing funk and pop, about to fall into the brink, but creating an utterly individual album that wound up being his last masterwork and one of the great funk albums of its era. Stephen Thomas Erlewine. AllMusic
Sly Stone