Heard Ya Missed Me, Well I'm Back 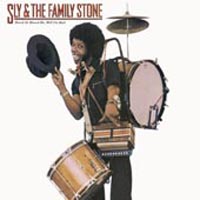 03. Nothing Less Than Happiness info

06. Everything in You info

07. Mother Is A Hippie info

Heard Ya Missed Me, Well I'm Back is the eighth album by Sly & the Family Stone, released by Epic/CBS Records in 1976.

The title says it all: Heard Ya Missed Me, Well I'm Back. Well, it kind of does. Then again, maybe not. Yes, this is a clear-cut comeback album for Sly Stone after his descent into hitlessness, and yes, his legion of fans did miss him — or at least the Sly of old, the one who'd recorded such classic albums as Stand!, There's a Riot Goin' On, and Fresh. But no, though Sly & the Family Stone may get the billing here and may have indeed recorded this album, it's not the Sly & the Family Stone that fans had missed. In fact, Heard Ya Missed Me, Well I'm Back plays like a Philly soul version of Sly & the Family Stone, or something like that. It's an odd album, for sure, and while its oddness may prove intriguing upon initial listen, it's not because it's a great album. Truth be told, it's not even a good album. It's simply odd, and quite slight at that. There are a few glimmers of greatness here, but only a spare few. So if you're a Sly fanatic or completist, or if you're just plain curious to see why this album is so unappreciated even by hardcore fans, feel free to track it down (which won't be easy, since it was out of print for years). But don't expect this to be some long-lost diamond in the rough. If that's what you're looking for — a latter-day Sly album worth hounding — crate-dig for High on You (even if only for a few key hip-hop samples) or Back on the Right Track (a sincere comeback attempt, albeit one that fell short of the mark). Heard Ya Missed Me, Well I'm Back contends with Ain't But the One Way for the least-essential Sly album, and for the status of which is the oddest (discounting that God-awful disco remix album that closed out Sly's Epic contract, of course). Jason Birchmeier. AllMusic
Sly Stone