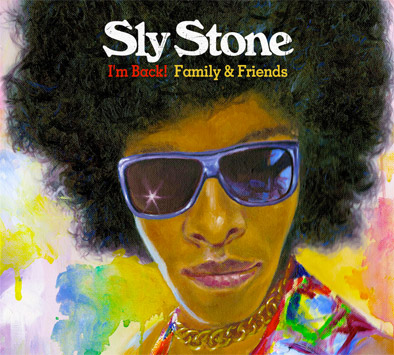 01. Dance To The Music info

(feat. Johnny Winter)
06. I Want to Take You Higher info

10. His Eye Is On The Sparrow info

12. Dance To The Music info

It's been more than 2 decades since the frontman for the groundbreaking
R&B/Soul outfit Sly & The Family Stone has released a full album of new
recordings. In that time, Sly Stone has become one of music's most elusive
recluses, making live appearances on rare occasions at select events,
including the 2006 Rock N' Roll Hall Of Fame induction ceremony, and all the
while his legend has grown and grown. In recent years, Stone - the writer of
some of the most timeless and influential gems in music history such as
'Dance To the Music', 'Everyday People' and 'Family Affair' - has wrestled
with demons both personal and professional, but never allowed the
inspirational flame to die out completely. Now, Sly returns with brand new
versions of classic songs from the Stone family repertoire, aided by Jeff
Beck, Ray Manzarek, Bootsy Collins, Ann Wilson (Heart), Carmine Appice and
others!

Sly Stone slipped off the radar long before he slid into seclusion, his long fadeaway beginning at the peak of disco, his Reagan-era albums for Warner roundly ignored. He disappeared after 1982’s Ain’t But the One Way, yet rumors of a comeback continued to surface well into the new millennium, gaining momentum in 2006 when Sly gave his first public appearance in decades during that year’s Grammy Award tribute to Sly & the Family Stone. It was, like so much surrounding Sly, a botched performance, but he did venture out for some genuine concerts not long afterward and an excellent 2007 Vanity Fair piece from David Kamp suggested that Stone was working on new music, music that would constitute a genuine comeback, modestly raising expectations that Sly may have finally pulled his act together. Given his history, it should come as no shock that this turns out not to be the case. The comeback album, hopefully if desperately titled I’m Back!, is a garish mess built largely on inept re-creations of classic Family Stone singles, sometimes assisted by guests shoehorned into the original arrangements. Jeff Beck muscles some fuzz guitar into “(I Want to Take You) Higher” and Bootsy Collins relaxes into “Hot Fun in the Summertime,” but to no avail: their spirited efforts can’t salvage the cavernous plastic arrangements, all built with too much sterile separation. These re-creations are at least marginally better than the atrocious “remixes” -- of the re-creations, not the originals -- tacked onto the end of the record, but most disappointing are the two originals, “Plain Jane” and “Get Away,” tossed away in the middle of the record. As songs, these are not outright disasters -- they’re not bad evocations of post-Riot funk -- but they’re saddled with the same awful production that hobbles the re-creations, the same sticky, tacky, desperate replication of the past that only underscores just how long ago Sly’s golden years were. Stephen Thomas Erlewine. AllMusic
Sly Stone