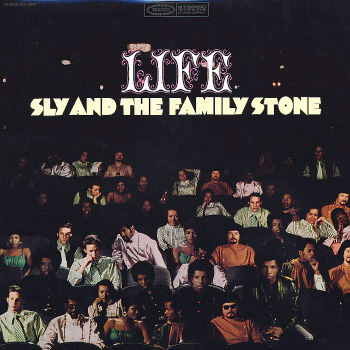 12. Only One Way Out Of This Mess info

Life is the third studio album by Sly & the Family Stone, released in September of 1968 on Epic/CBS Records.

LIFE, Sly's follow-up to his commercial breakthrough, DANCE TO THE MUSIC, was very much in the same vein as its predecessor. An innovative brand of psychedelic soul, with large helpings of horns, fuzz guitar, and bottom-heavy bass, it was to become the sonic template for just about every funk act of the '70s.
The band is brash and palpably bursting with confidence, which may explain why Sly pulled a postmodern Beatles move, quoting "Dance to the Music" at the tag of the opening "Dynamite." (On the other hand, maybe Sly just had a thing for the Beatles--there's an "Eleanor Rigby" quote in "Plastic Jim.") Interestingly, despite the album's popularity, LIFE yielded no hit singles, although almost everybody assumed that the title song, an FM radio favorite, had actually charted. CD Universe.
---
Rolling Stone (9/21/95, p.85) - 4 Stars - Excellent - "...LIFE is where Sly's dazzling all-things-to-all-people vision snaps into full focus....When Sly testifies on `Life,' insisting that `you don't have to come down' and `you don't have to die before you live,' the ebullient music supports his spiritual tightrope walk..."
---
Just a matter of months after Dance to the Music, Sly & the Family Stone turned around and delivered Life, a record that leapfrogged over its predecessor in terms of accomplishment and achievement. The most noteworthy difference is the heavier reliance on psychedelics and fuzz guitars, plus a sharpening of songcraft that extends to even throwaways like "Chicken." As it turns out, Life didn't have any hits — the double A-sided single "Life"/"M'Lady" barely cracked the Top 100 — yet this feels considerably more song-oriented than its predecessor, as each track is a concise slice of tightly wound dance-funk. All the more impressive is that the group is able to strut their stuff within this context, trading off vocals and blending into an unstoppable force where it's impossible to separate the instruments, even as they solo. The songwriting might still be perfunctory or derivative in spots — listen to how they appropriate "Eleanor Rigby" on "Plastic Jim" — but what's impressive is how even the borrowed or recycled moments sound fresh in context. And then there's the cuts that work on their own, whether it's the aforementioned double-sided single, "Fun," "Dynamite!," or several other cuts here — these are brilliant, intoxicating slices of funk-pop that get by as much on sound as song, and they're hard to resist. — Stephen Thomas Erlewine. AMG
Sly Stone