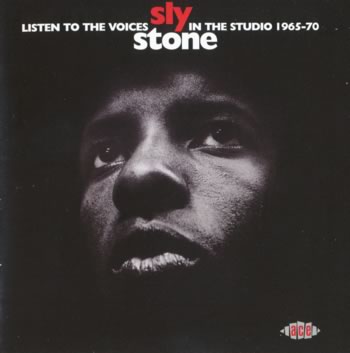 Freddie & The Stone Souls
12. Life of Fortune and Fame info

Sly & The Family Stone
13. Are You Sure info

Sly & The Family Stone
16. You Really Got Me info

Sly & Billy Preston
19. Something About You info

In the years when Sly Stone was getting the Family Stone together and rising to stardom with that group, he was continuing to produce or otherwise be involved with other artists on the side. While earlier examples of such material were issued on Ace's compilation Precious Stone: Sly Stone in the Studio 1963-1965, this has later material that, as expected, shows his sound moving in decidedly funkier and more mature directions. There's a nearly bewildering assortment of efforts among the 25 tracks, including cuts by the Beau Brummels (both previously unreleased); Billy Preston; the pre-Family Stone outfit Freddie & the Stone Souls, led by Sly's brother; a couple unreleased demos by Sly himself; and some actual Sly & the Family Stone material, though the four of those five tracks dating from their first studio session in January 1967 slipped out on obscure compilations in 1969 and 1975. While this is consistently interesting, the chief distinction between most of it and his most famous Family Stone stuff is plain: the songs themselves (usually penned by Sly) simply aren't nearly as strong, often working more as vehicles for ideas and grooves than as standout compositions in their own right. Nonetheless, this is a gold mine for the Sly historian, including as it does some real rare sides by the likes of Abaco Dream, 6IX, and the French Fries, though the last of these (as you can tell by the name) are pretty novelty-oriented. The styles range from emotional soul balladry and uptempo dance sounds to deep funk, or even, as in the case of the Beau Brummels, folk-rock. What strikes you hardest will depend on your taste, but some special excavations of note include a previously unreleased souled-up 1966 Sly solo demo of the Kinks' "You Really Got Me"; the one previously unissued Sly & the Family Stone track, the simmering "Man Does Not Live" (from March 1968); and, most of all, the four tracks from 1970 Top 40 singles by Little Sister that anticipate elements of There's a Riot Goin' On, especially in the use of a Rhythm Ace drum machine on their "Somebody's Watching You"/"Stanga" 45. Alec Palao's liner notes in the 24-page booklet, with first-hand interview material with Sly himself, are likely to be the most thoroughly detailed overview of these recordings ever written. ~ Richie Unterberger, All Music Guide
Sly Stone