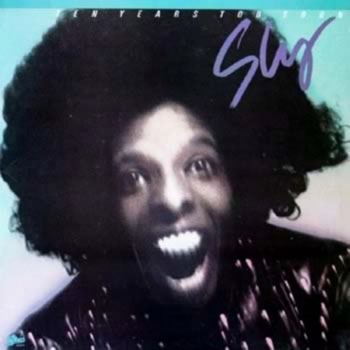 1. Dance To The Music info

remix
3. I Get High On You info

remix
5. You Can Make It If You Try info

remix
7. This is Love info

Remix albums became quite common in the 1980s, but when Epic released this collection of Sly & the Family Stone remixes in 1979, the concept was still relatively new. Ten Years Too Soon takes several of Stone's major hits (most of them from the late 1960s) and tries to make them relevant to the disco scene of 1979. Many rock journalists cried foul and denounced this LP as cheap, shameless exploitation on Epic's part. As they saw it, Epic was committing musical blasphemy by tampering with great works of art that shouldn't have been tampered with. However, you have to take into consideration the bias of those critics; they hated disco in general and were determined to condemn this LP even before they heard it. It's true that the original versions of classics like "Sing a Simple Song," "Dance to the Music," "Everyday People," and "Stand!" were the best -- you cannot improve upon perfection, and the songs certainly didn't need remixer John Luongo to validate them. But the club-minded makeovers that Luongo provides are, for the most part, tastefully done, even though they aren't as exciting as the originals. And in all fairness, Luongo isn't trying to improve Stone's hits; he's simply putting his own spin on them. If you're a Sly Stone fan who also has a taste for disco and dance-pop, you'll find Luongo's work on this LP to be mildly intriguing, if uneven and less than essential. Alex Henderson. AllMusic
Sly Stone