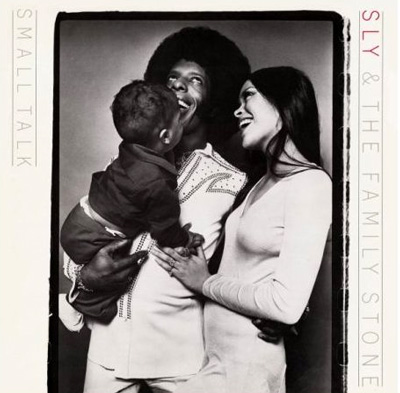 09. Better Thee Than Me info

Small Talk is the seventh album by Sly & the Family Stone, released by Epic/CBS Records in 1974. This album was the final LP to feature the original Family Stone, which broke up in January 1975.

Small Talk's singles were "Time For Livin'" (the band's final Top 40 hit) and "Loose Booty", an up-tempo funk track which uses the names of Bible characters Shadrach, Meshach and Abednego as a chant. Loose Booty was sampled extensively by the Beastie Boys for the song "Shadrach" on their album Paul's Boutique and the Beastie Boys also loosely reworked the track Time for Livin in an punk rock format on their album Check Your Head. Pictured on the album cover with Sly are his then-wife Kathleen Silva and his son Sylvester, Jr. Stone and Silva would divorce within months of this album's release, after being wed at a June 5, 1974 Sly & the Family Stone concert at Madison Square Garden.

By 1974, when Small Talk was recorded, Sly for was ripe for change personally and musically. Stripping away the drum machines from their previous places of importance on There's a Riot Goin' On and Fresh, Sly went back to what remained of the Family Stone, including trumpet and keyboard player Cynthia Robinson, brother Freddie and Sister Rose, Rusty Allen, who had taken over for Larry Graham two albums back, Jerry Martini, drummer Bill Lordan (who would later work with Jack Bruce and Robin Trower), violinist Sid Page, reed and woodwind boss Pat Rizzo, and Vet Stewart on vocals and keyboards. The album was, despite the number of musicians, organic, simple even. It was laid-back and soulful instead of burning-ass funky. There's very little grit in its grooves, but a lot of sparse, simple movement as evidenced by the title track, which opens the record where it's simply Sly, his baby son Sly Jr. babbling, fingersnaps, a keyboard, a bassline, and a drum beat. It sounded jive perhaps at the time because everyone had grown used to Sly the outlaw boogie monster. But Sly Stone knew exactly what he wanted: close to home, tape was left running between completed takes on certain tracks, and many takes were run of certain cuts so musicians could find their own way without being directed. The simmering summer soulfulness that came from the grooves -- check "Say You Will" -- was different, smaller in scope -- especially the strings, played actually, overdubbed, and even synthesized -- and far looser than any Sly & the Family Stone date in the catalog. It also was the end of the Family Stone, though no one knew it yet. The album yielded a bona fide Top 40 hit in "Time for Livin'," but was critically underappreciated and for good reason. It was an inside record that broke no ground and sounded a lot like retreading familiar steps in some ways. Even the gods die. [The 2007 remastered Legacy edition contains four bonus tracks, including an early version of "Crossword Puzzle," alternate readings of "Time for Livin'" and "Loose Booty," and an instrumental called "Positive," all of which have gone unreleased until now.] Thom Jurek. AllMusic
Sly Stone