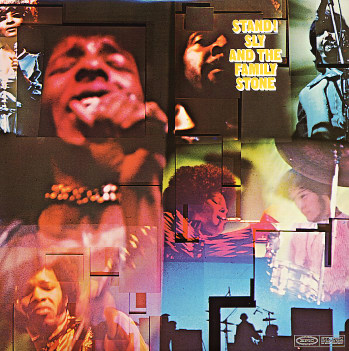 Single version [mono]
10. I Want to Take You Higher info

Single version [mono]
11. You Can Make It If You Try info

Stand! is the fourth studio album by Sly and the Family Stone, released in 1969 on Epic Records.

Stand! is the pinnacle of Sly & the Family Stone's early work, a record that represents a culmination of the group's musical vision and accomplishment. Life hinted at this record's boundless enthusiasm and blurred stylistic boundaries, yet everything simply gels here, resulting in no separation between the astounding funk, effervescent irresistible melodies, wildly psychedelicized guitars, and deep rhythms that were tight, yet expansive, popping in knotty cadences while never coming close to losing the groove. Add to this a sharpened sense of pop songcraft (that was developing into a sophisticated art form by this time), elastic and instinctual band interplay, and a flowering of Sly's political consciousness that didn't need to be hidden by calls for dancing and other social forms, and the result is utterly stunning. Yes, the jams ("Don't Call Me Nigger, Whitey," "Sex Machine") wind up meandering ever so slightly, but they're surrounded by utter brilliance, from the rousing call to arms of "Stand!" to the unification anthem "Everyday People" to the unstoppable "I Want to Take You Higher." All of it sounds like the Family Stone, thanks not just to the communal lead vocals but to the brilliant interplay of instruments, voices, and rhythms assembled so tightly. Each track is distinct, emphasizing a different side of the band's musical personality. As a result, Stand! winds up as a creation that is infectious and informative, invigorating and thought-provoking -- stimulating in every sense of the word. Few records of its time touched it, and Sly topped it only by offering its opposite the next time out. [Legacy's gorgeously remastered reissue of the album includes five bonus cuts. There are mono single versions of the title track and "I Want to Take You Higher," as well as a beautiful unissued single version of "You Can Make It If You Try," a freaky instrumental called "My Brain (Zig-Zag)," and the unreleased "Soul Clappin' II."] Stephen Thomas Erlewine. AllMusic
Sly Stone