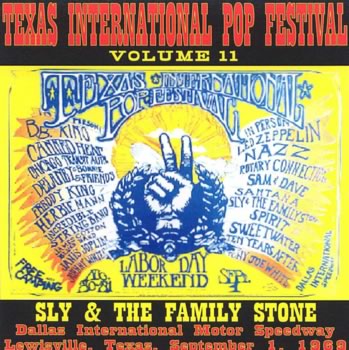 3. You Can Make It If You Try info

6. Dance To The Music info

[Dance to the Music / Music Lover / raps]
7. I Want to Take You Higher info

[I Wanna Take You Higher / Jam]

In the late summer of 1969, just a few weeks after they'd played Woodstock, Sly & the Family Stone performed at the Texas International Pop Festival. This is a 50-minute CD bootleg of their performance, and while the sound isn't quite up to official standards, it's not that far off. As such, it's a pretty good souvenir for major Sly & the Family Stone fans, though the average listener might find it a bit superfluous. The band is in good form as it navigates a nine-song set that includes some of its most popular '60s material ("Stand!," "Everyday People," "Higher," "Dance to the Music"), as well as a few less overexposed tunes ("You Can Make It if You Try," "M'Lady"). It also gives you a good idea of how adroitly they combined and flowed into different songs on-stage, and shows them stretching out the numbers from their more concise studio renditions, particularly on "Dance to the Music" and "Higher." A higher-fidelity late-'60s two-CD Sly & the Family Stone bootleg (Thee Encyclopedia of Ecstasy: Pts. 3 & 4), taken from shows at the Fillmore East in October 1968 and most likely intended for official release at some point, does exist if you're a stickler for fidelity. The band is closer to its peak performance, and material, on this set, however, and it's likely you'll want it if you want any unreleased Sly & the Family Stone at all. Richie Unterberger. AllMusic
---
http://www.guitars101.com/forums/f90/sly-and-the-family-stone-texas-international-pop-festival-dallas-1-september-1969-a-112485.html