The Clinton Administration - Take You Higher 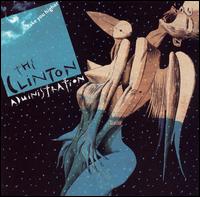 01. I Want to Take You Higher info

04. Dance To The Music info

05. Everybody is a Star info

06. Hot Fun in the Summertime info

Robert Walter revisits his Clinton Administration project, but with wholesale changes this time out. First off, the only players remaining from the first album are Walter and percussionist Chuck Prada, who team up with fusion jam band Garaj Mahal, drummer Stanton Moore (Galactic), and additional guitarists Michael Lee Firkins and Charlie Hitchcock. Secondly, rather than doing more George Clinton tunes, they shift the focus to the songs of Sly Stone. There is no doubt that Sly & the Family Stone delivered some fantastic tunes, but they were never the non-stop party band that the P-Funk All Stars are, and it's that difference that sets Take You Higher apart from One Nation Under a Re-Groove. "Everybody Is a Star" and "You Can Make It if You Try" may be uplifting songs, but it's more due to the lyrical sentiments than the music itself, and divorced from the lyrics, the songs just don't stand up the same way. Another thing is that as these songs get stretched out so the bandmembers can strut their stuff a bit, they tend to lose the focus of the tune, and sort of devolve into jamming. Case in point: "Everyday People" sounds more like they were trying to play "Shhh/Peaceful" from In a Silent Way, with the melody for "Everyday People" dropped in sporadically. It's all well played, to be sure, and there is some great soloing, but this album would probably appeal more to folks who are already Garaj Mahal fans rather than those who picked up the last Clinton Administration set. Perhaps it's the nature of a project like this that it runs out of steam fairly quickly, but One Nation Under a Re-Groove was so strong that they can surely deliver another album that lives up to it. Unfortunately, Take You Higher misses that mark. by Sean Westergaard. AllMusic
Sly Stone