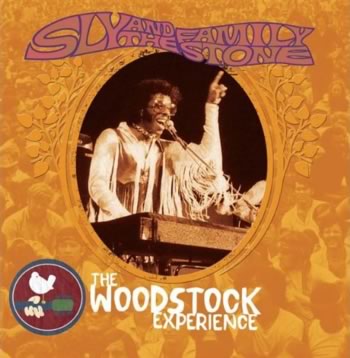 Sony/BMG's Legacy imprint decided to commemorate the 40th anniversary of Woodstock by issuing a slew of double-disc deluxe packages by catalog artists who played the festival. Each slipcase contains the featured artist's entire performance at Woodstock and, as a bonus, an LP sleeve reproduction of a classic album issued near the time the festival occurred, as well as fine, individually designed 16" X 24" double-sided posters. Sly & the Family Stone were riding the chart success of Stand!, their fifth album in three years(!), that had been released the previous May for Epic when they played the Woodstock Festival. Going on at 3:30 in the morning of Sunday, August 17, 1969, they brought their West Coast meld of soul, R&B, gospel, positive vibes, and the newly emerging funk to the tired masses and turned them into a stomping, screaming, joyous, army of believers. Hearing this set reconstructed in its original context is a gift. The band came storming out of the gate with "M'Lady," and didn't stop for 50 minutes. The music that had previously been heard on the Woodstock albums -- "Dance to the Music," as well as the medley of "Music Lover/"Higher," and "I Want to Take You Higher" -- actually took place in the middle of the band's concert. Before and after are six other performances that have never been issued before. The gig was comprised mainly of tracks from the then-current album: the title track, "Everyday People," "Sing a Simple Song," "I Want to Take You Higher," and "You Can Make It If You Try." "Love City," a little known jam from the M'Lady LP is also here. "Stand" closes the album on a somewhat mellower groove than they'd started with at its 100-miles-an-hour pace, but it's presented with the ease and flawless execution of a group of master show men and women who can take a crowd to the outer edges of excitement and bring them back seamlessly. The funk groove at the end of the track assures concertgoers that what they'd just heard was real. Sonically, it fares a little better than some of the volumes in this bunch: Eddie Kramer did a fantastic job of mixing. This is a surprise and one of the best titles in the series hands down. Thom Jurek. AllMusic
---
Sly & The Family Stone.txt

1. Stand!
2. Don't Call Me Nigger, Whitey
3. I Want To Take You Higher
4. Somebody'S Watching You
5. Sing A Simple Song (Single Version)
6. Everyday People (Single Version)
7. Sex Machine
8. You Can Make It If You Try